In my diploma thesis I deal with problems of institution as a “cultural partner” and its paradoxical necessity for revolting artist. I am asking questions, which I am going to answer and the exhibition [no censorship] is the first from series of exhibitions that will be opened in next months.
My approach of artist, curator and gallerist in one demonstrates getting out of
institution, which keep silence, censorship and control the artworks.
Why are some artworks still being censored just because political, religious, divergent or moral phobias? When is author working tactically, and when is censorship giving a negative statement? Where ends artist’s freedom? Are media giving popularity to censored artworks? When is it tactics of artist and when is it only a negative ad? Who is controlling the censorship and why? 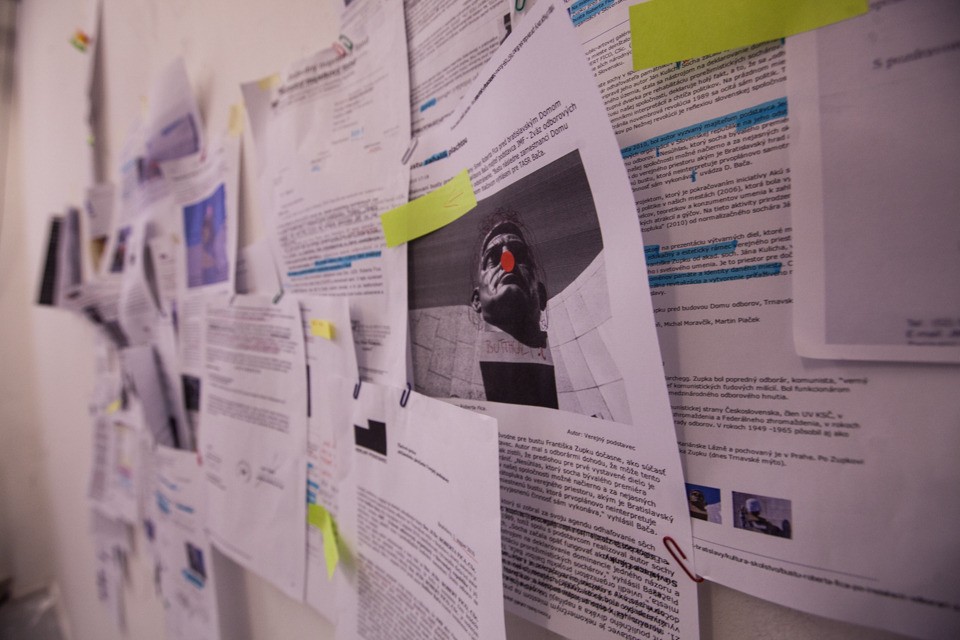 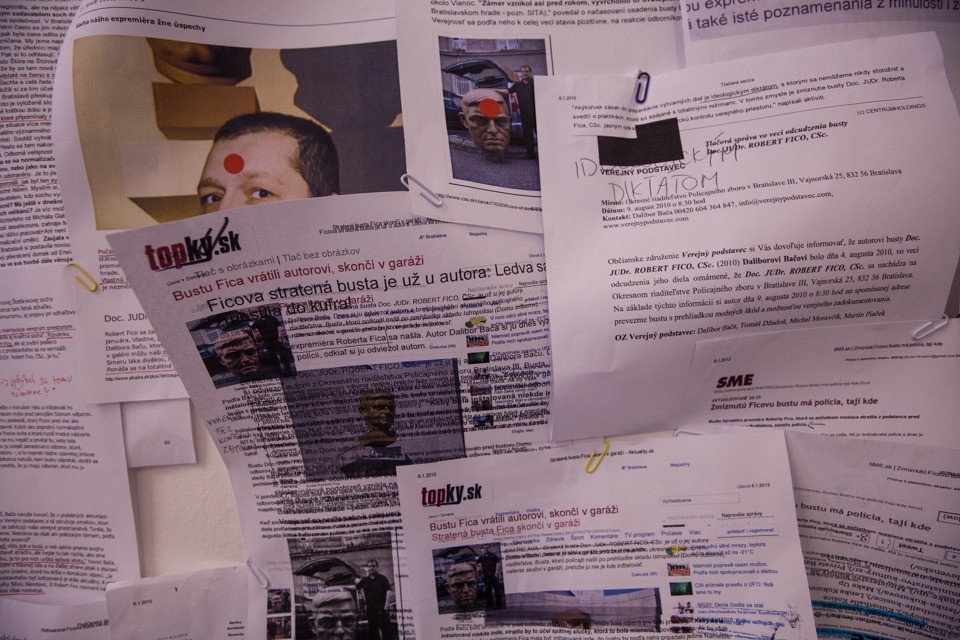 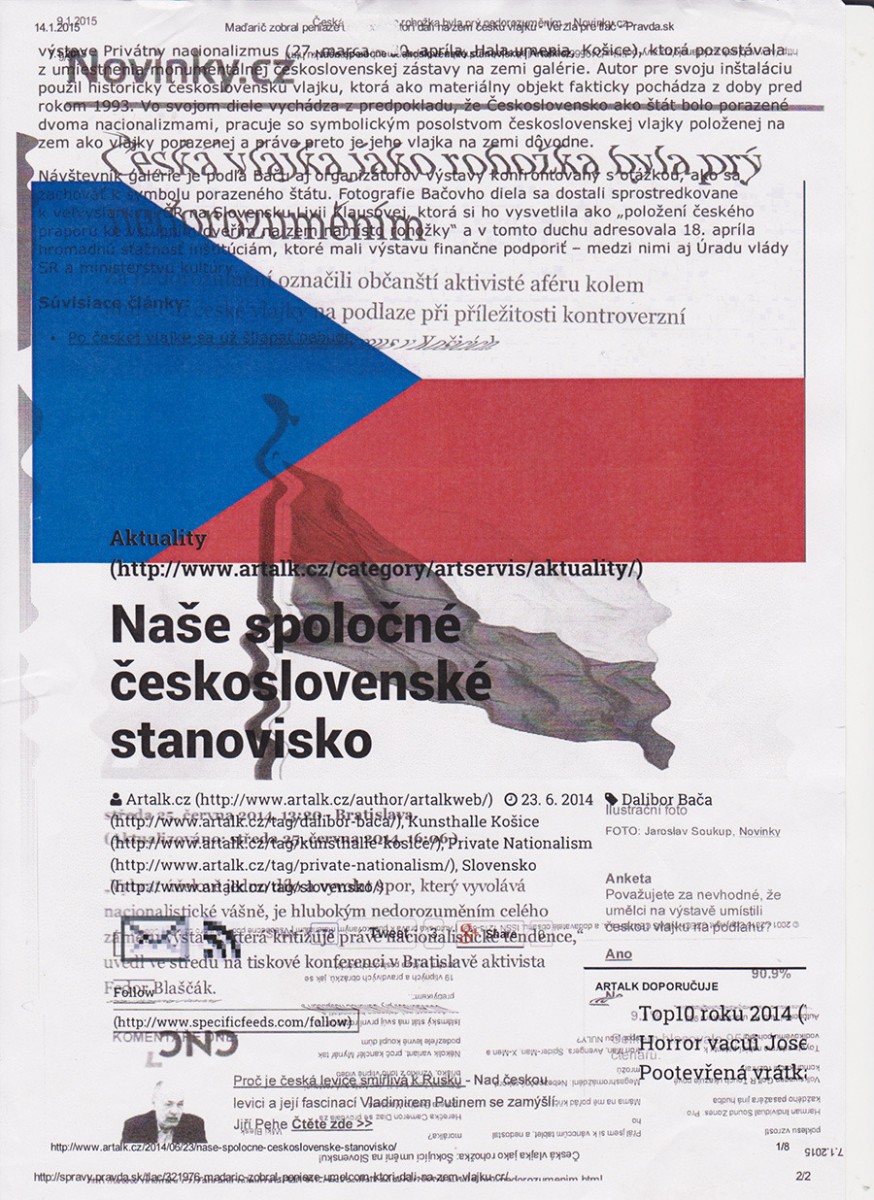 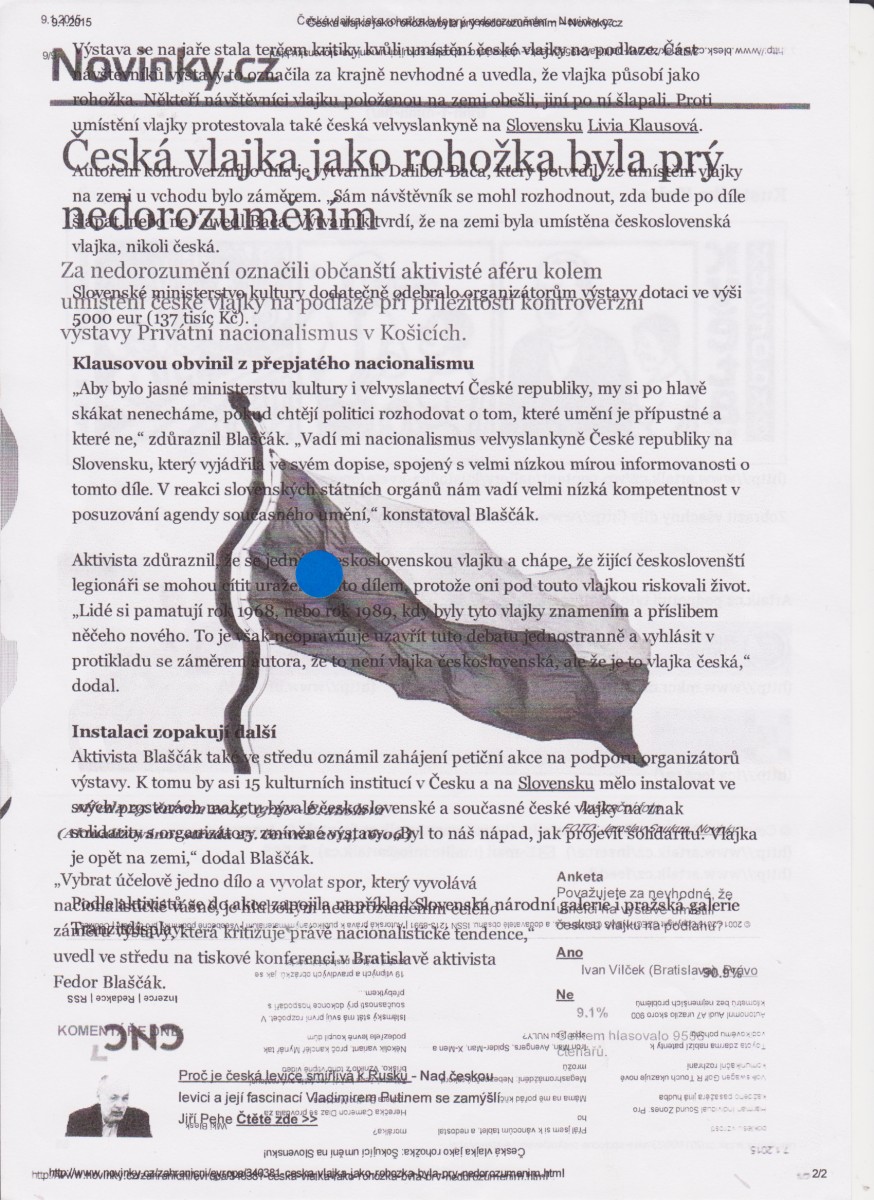 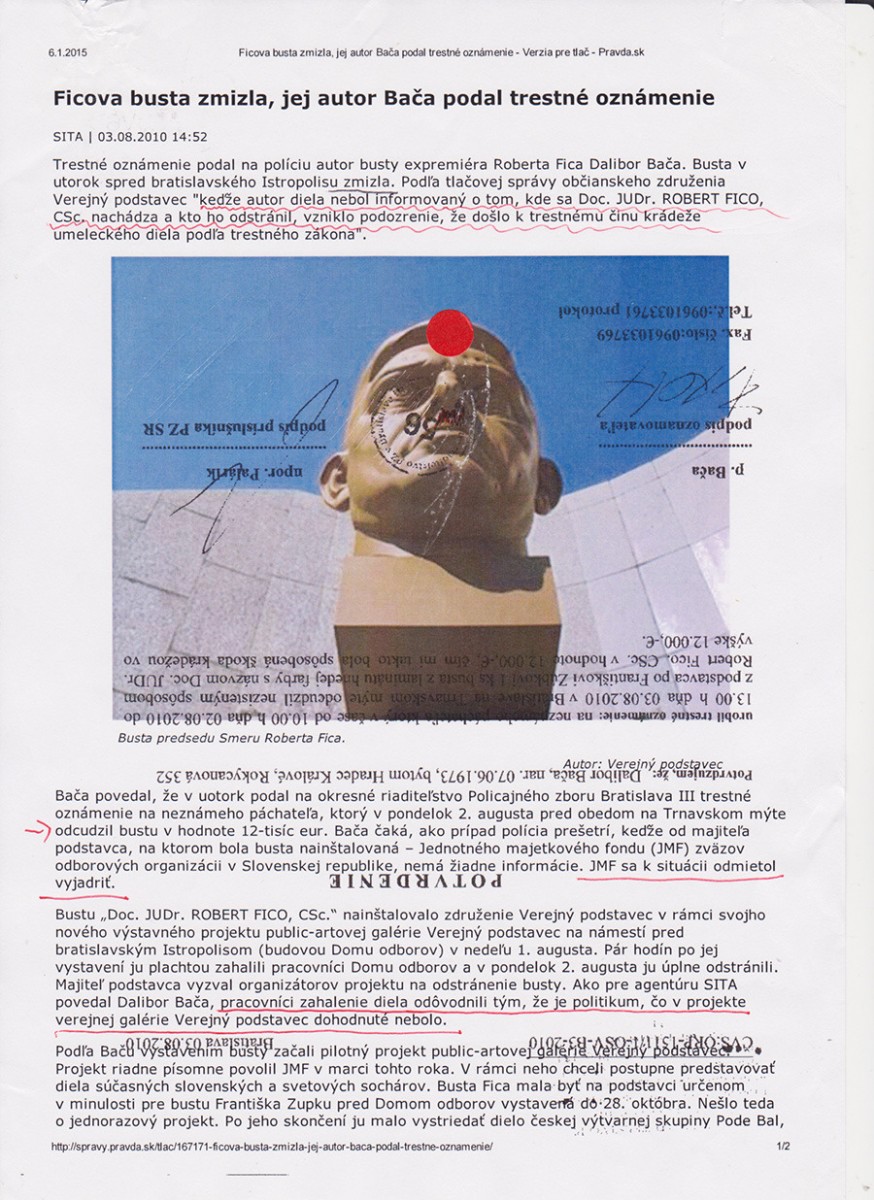 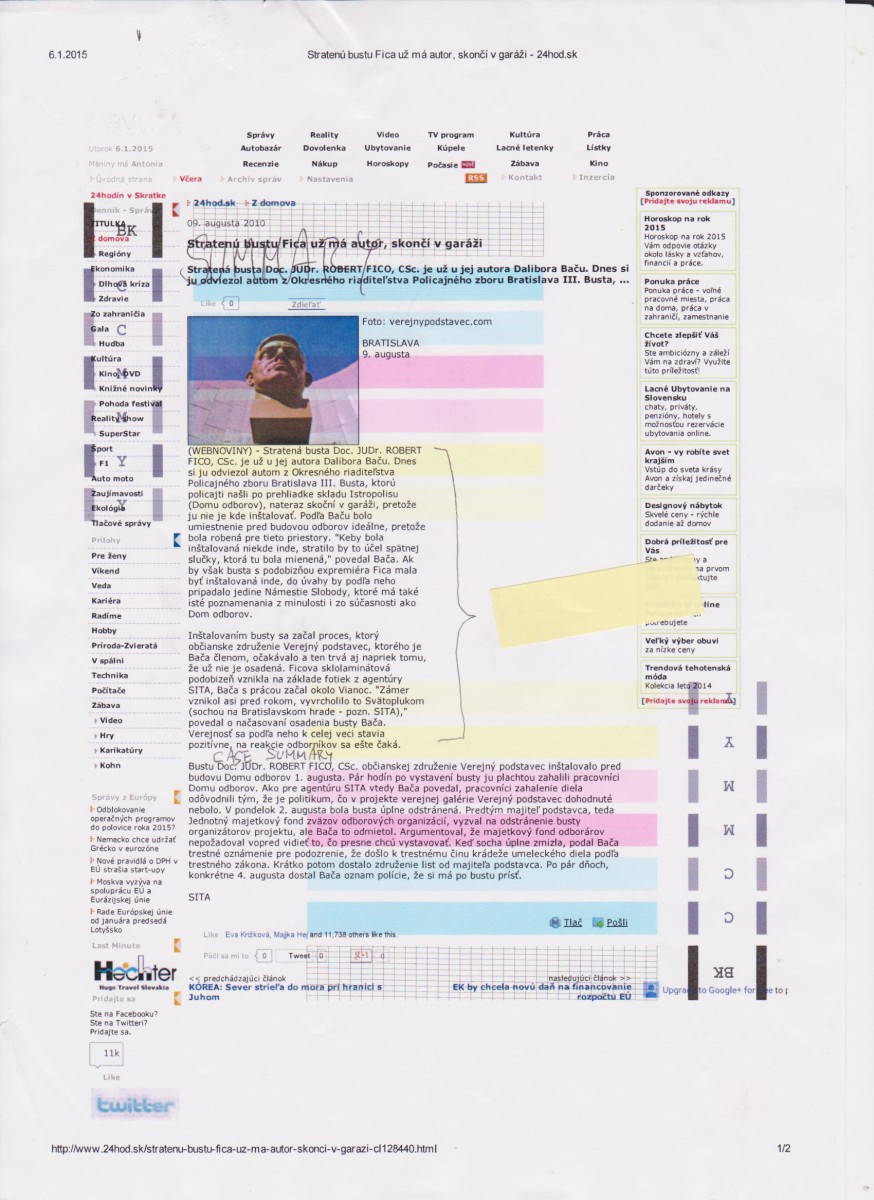 This exhibition is part of a series of exhibitions, in which I’ve been dealing with the issues of art institution of today and with the topic of institution as a “cultural partner” and its paradoxical inevitability for a revolting artist. The opening exhibition [bez cenzúry] (no censorship) took place in A4 nultý priestor on 15th January 2015 and consisted of documenting works of art that had been censored out of galleries and general public. The name of the exhibition *zaužívaný model* (established model) appears on several connotation levels: in the first part it refers to extensively discussed model case of controversial work of art that resonated even more than the work itself; on another level it depicts the prehistoric culture financing model and the last level provides space to contemplate the present drill in art community circles – the ironical comment revealing elitism present there.
Last but not least, the concept of deliberate insult, provocation and calculated use of those to get more media coverage is also present in the exhibition to indicate the existence of such strategies in the world of art. The exhibition provides space for further dialog and mapping through the reactions to it.

1. Model case
Hidden installation at the entry door refers to the previous exhibition [bez cenzúry], in which I focused on censored works of art with media coverage and also deal with the case of Dalibor Bača’s work CZ_SK_HU_D_PL from Privátny Nacionalizmus (Private Nationalism) exhibition. Reappropriation of Bača’s piece portrays the same measure of confusion present in his work that remained untold.
Unbeknownst to the visitor, he is walking on the carpet under which a flag of an existing country and two already non-existent ones are placed. The sequence of white-blue-red colours without any symbol was namely also used since 1939 during the period of Slovak state as an official flag of Protectorate of Bohemia and Moravia. I’m curious who could be offended by that. The Russians? Czechs? The supporters of the first Slovak state? Or Dalibor Bača himself? The rug is an ironical manifestation of several similar comments, which appeared in discussions – “I would stomp Mr. ‘artist’s’ face” and similar. Well, suit yourself. 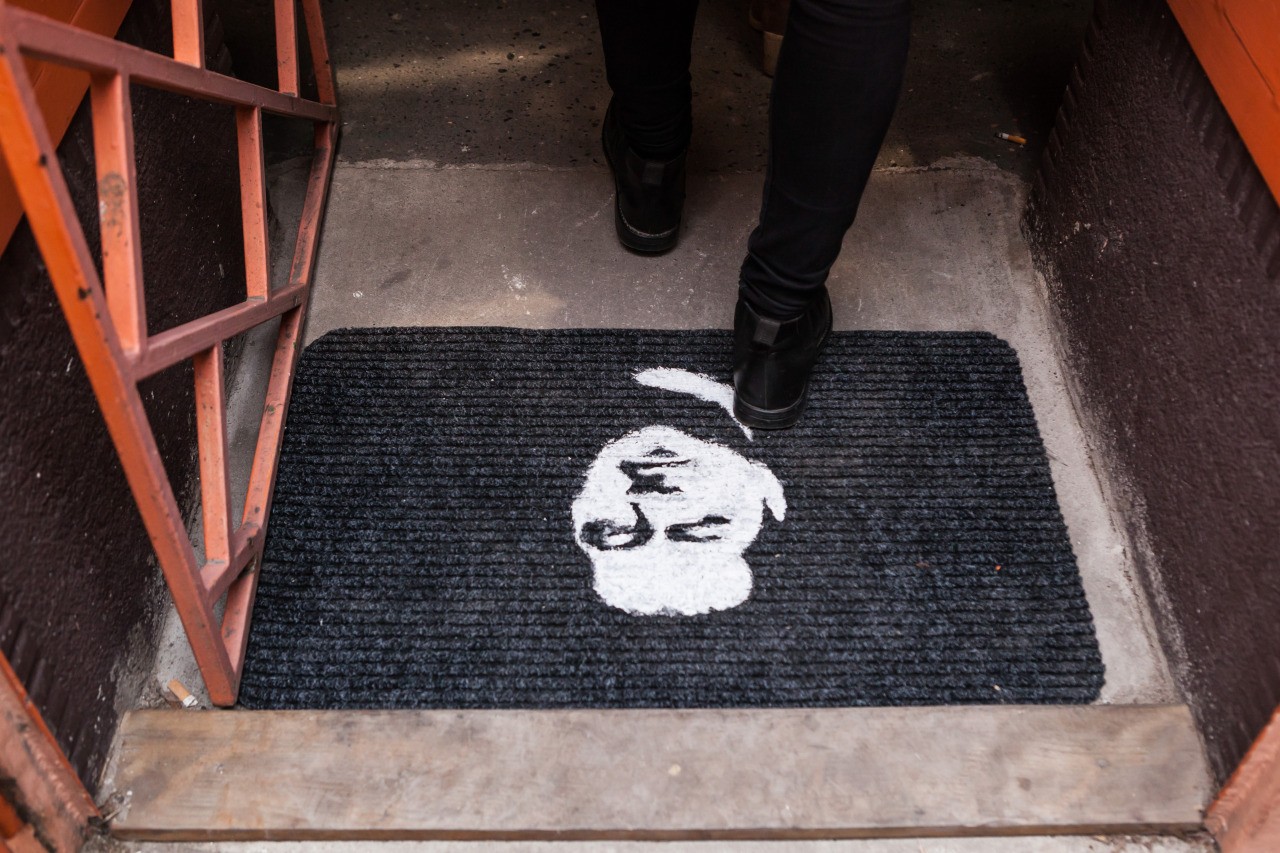 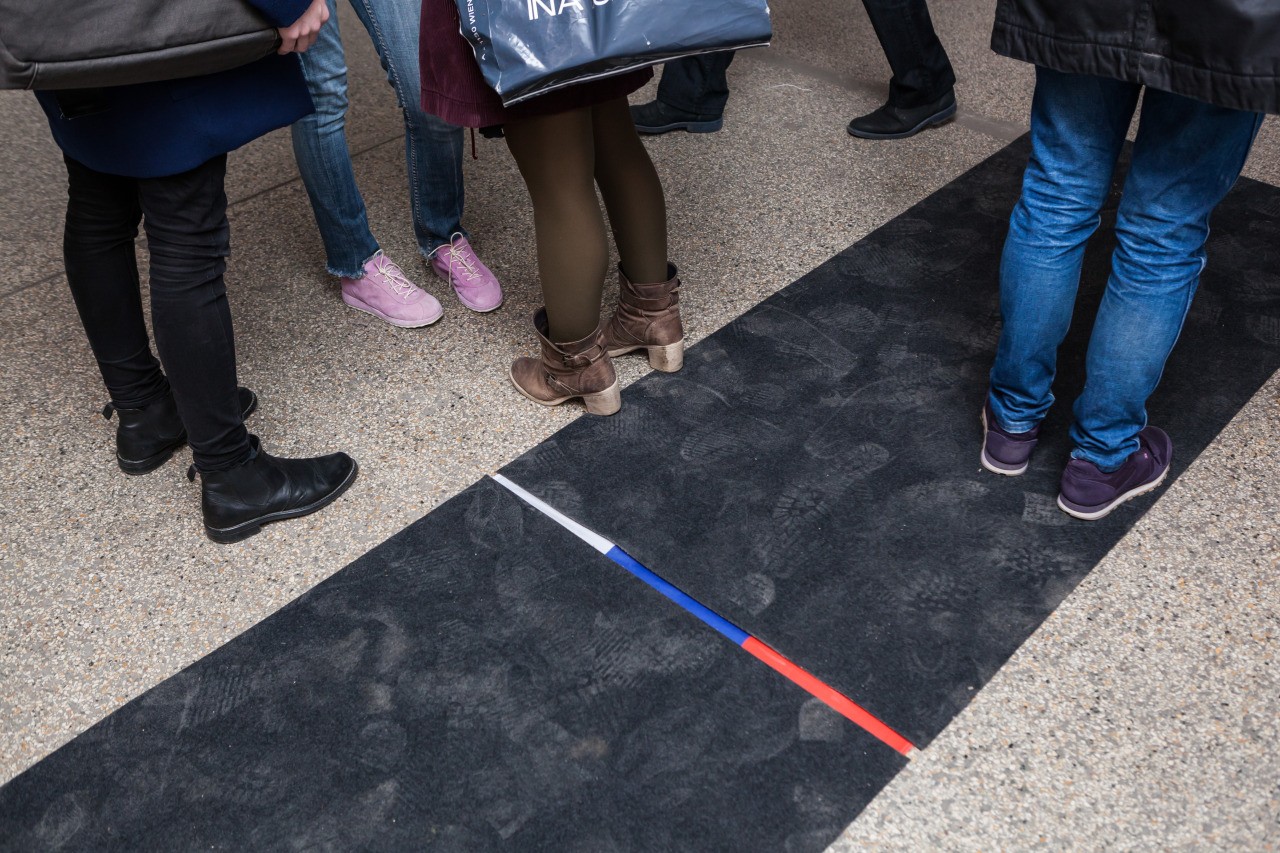 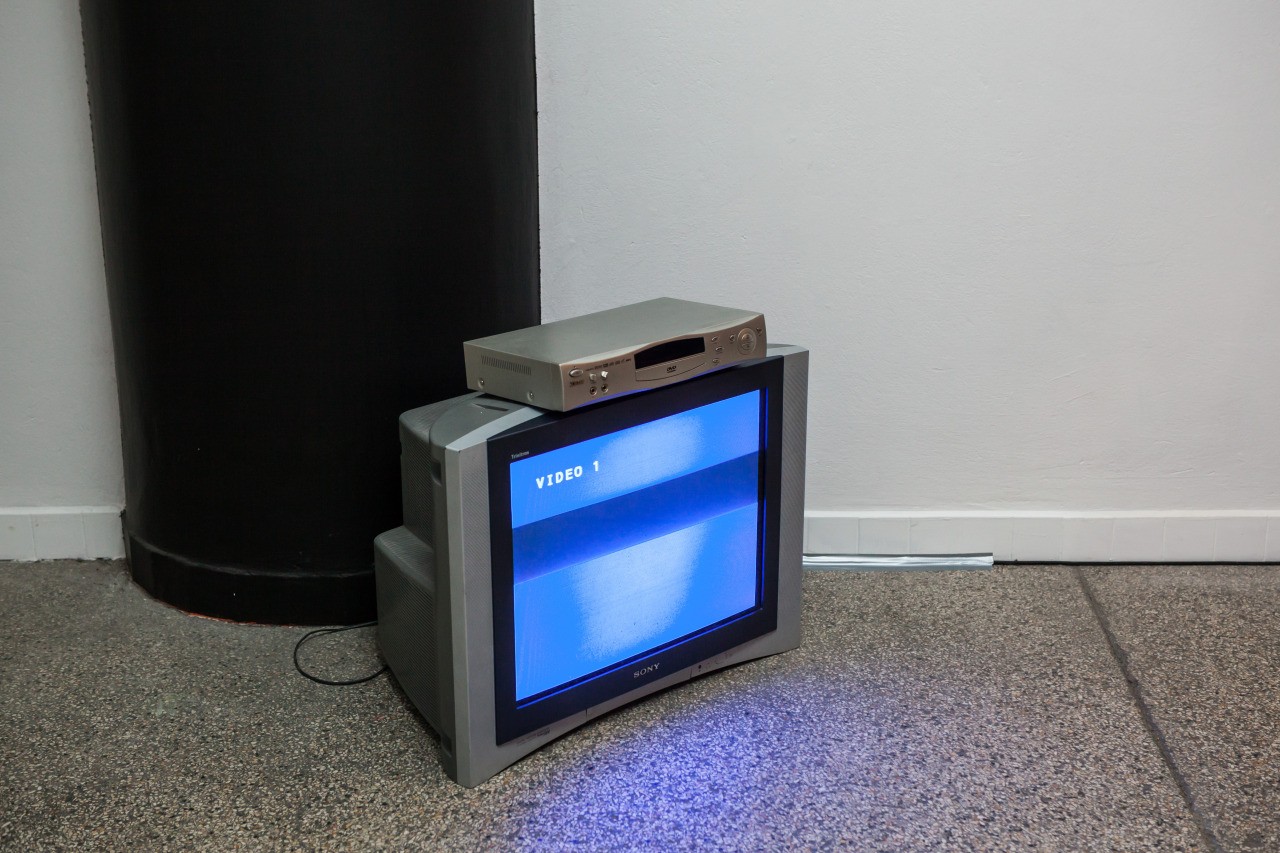 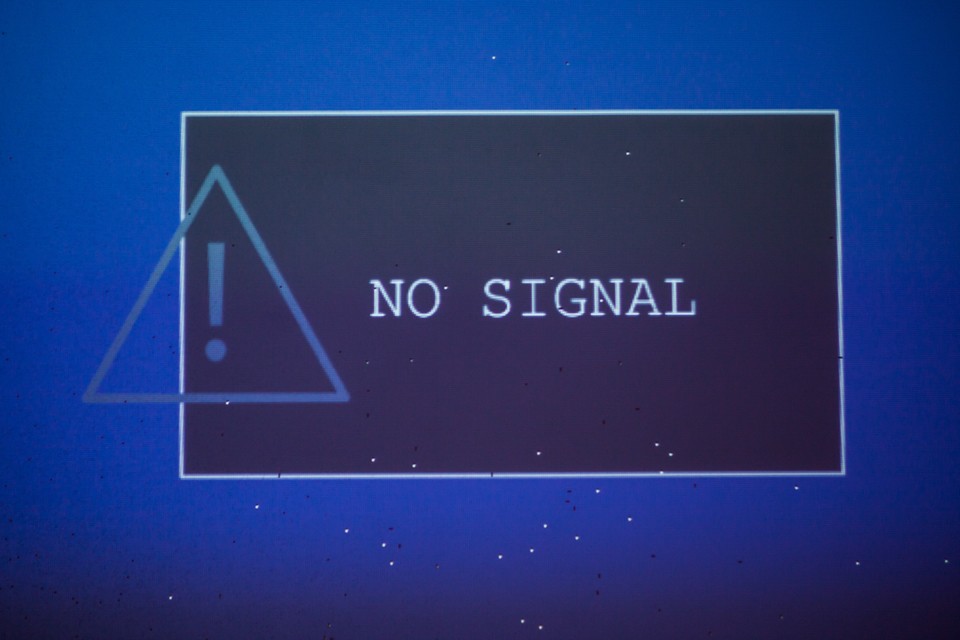 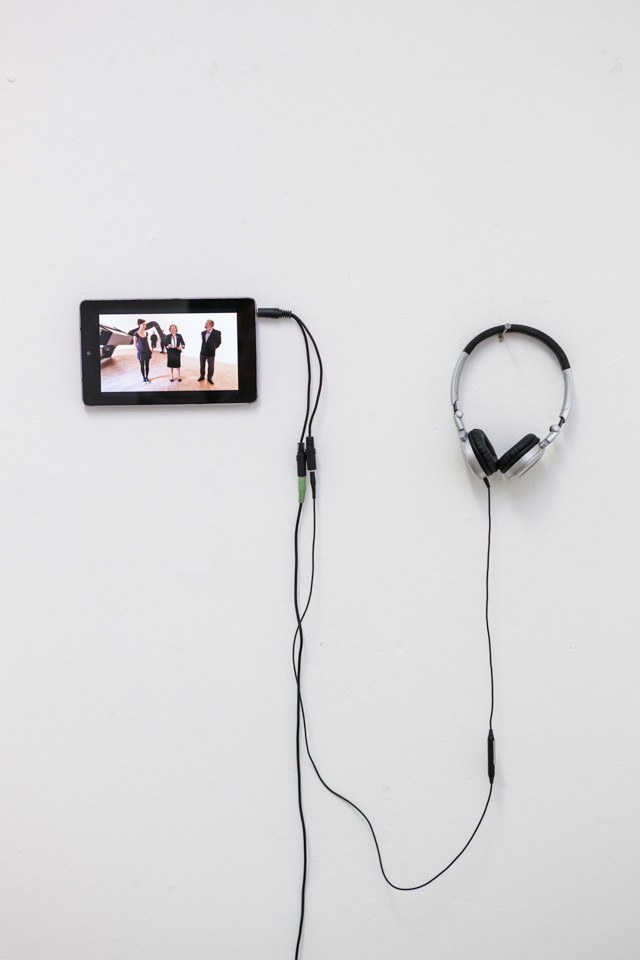 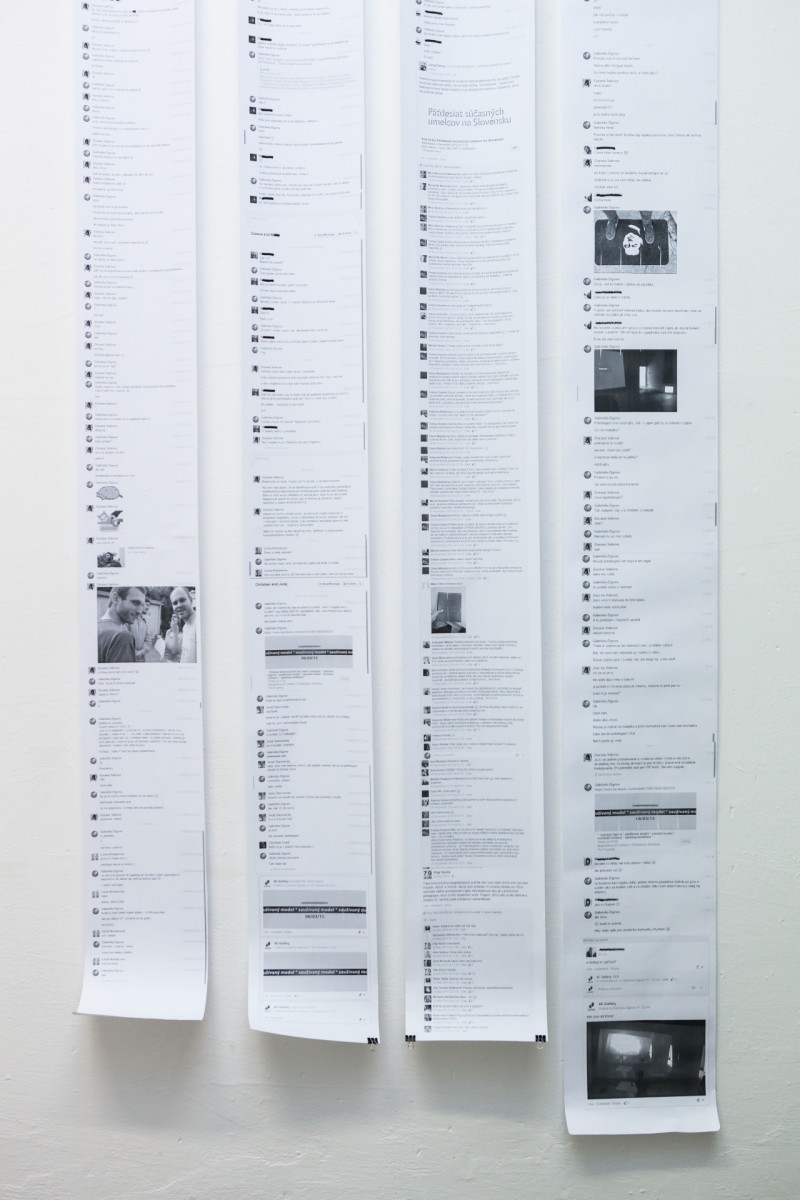 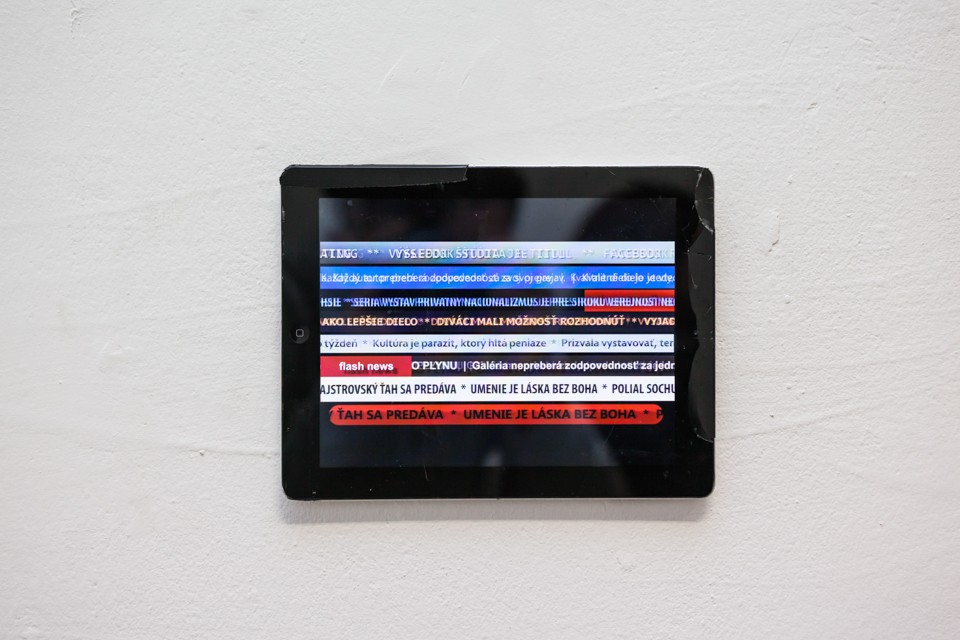 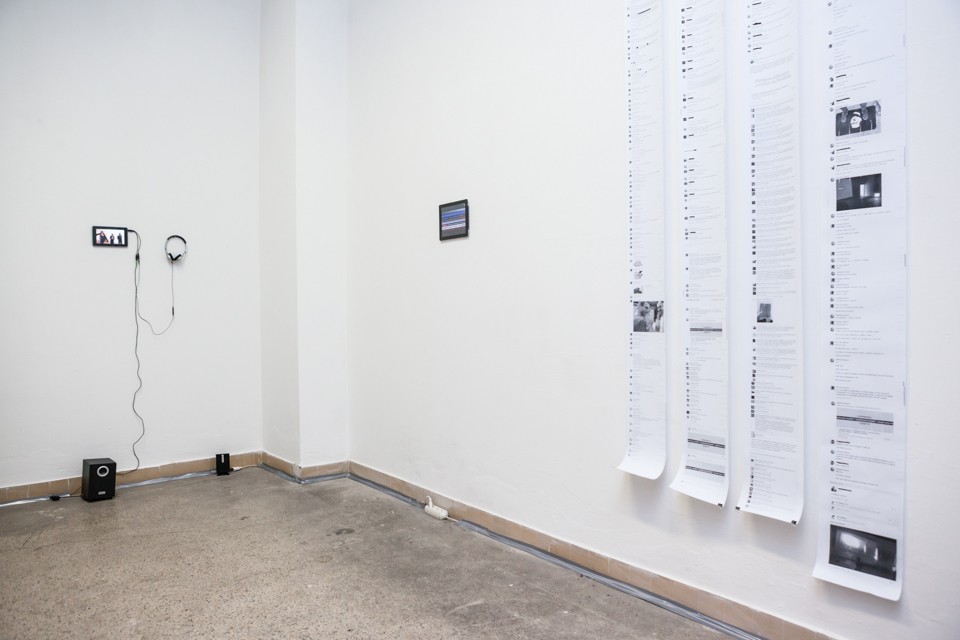 2. Intermedia model
It comprises standard installation model used in the past decades (not leaving the equipment itself out):
Used headphones, video projection not working right, black pixels and CRT TV set are just a brief presentation of the issues fought with (not only) by the intermedia university department. Old equipment from a Japanese grant is still working as an inadequate means of expression for students of this discipline and their further education in this line of study becomes ineffectual.
Unpopular technologies used will doom even the best quality video art to dullness.
Sonic and visual backgrounds have the purpose to deliberately act as a visitor trap by misleadingly not working. White noise and strange echoes in headphones, bluescreen, blank pixels and flickering video projection later on that goes off from time to time to kill any hint of hope represent a hyperbole.
The moment of surprise occurs when the author has a quarrel with the gallerist, accusing each other of failures and mistakes and thus uncovering the patterns of how the art scene works. When the author stands in background, doesn’t acquire contacts and isn’t part of the right circles = he remains unknown, doesn’t exhibit nor publish. This quarrel suddenly reappears in the projection (+ additionally as an echo in the headphones), subsequently the picture mirrors itself creating a multihole, a metaphorical pit that dominates the art scene. “The same names over and over, nobody’s up for the real meat.” Zuzana Sabová

3. Customary practices
At this moment you are reaching the explanation of the manipulation of the whole exhibition. Now you know the verbal conflict was just a play-act, you also know that you have stepped not only on the Russian flag but on Dalibor Bača’s face as well. Magdaléna Vášary’s speech may appear to be boastful and comical at the same time (First of all, I’d like to apologize for wearing a suit. … You can spill vine here, not over there. … The palace has a beautiful and quiet courtyard where you can come and sit. In a few moments there will be a closed banquet so I won’t be inviting you to go there today. … We’ll be happy if you browse through our magazine when you find it on Via Cultura, the institute for cultural policy. … A conference on twentieth anniversary of the Slovak Foreign Policy Association, which I founded twenty-one years ago is just starting in the other part of the palace.”), but her prohibiting the placing of Kristián Németh’s work of art on OFF Festival, which I had pointed out in my previous exhibition, isn’t equally funny at all. This approach is a model example of a politician using his position of power to make decisions about culture, having no grasp of current state of affairs in the art scene at the same time.
This coating of politics on institutions can become inspiring for an artist the moment he realizes, that a certain gallery is not an autonomous and free place for his artistic expression anymore. That’s when the possibility of resistance, acceptance of the politician as audience comes and proportionally controversial piece of art can start a proportionally relevant discussion even outside of community circles