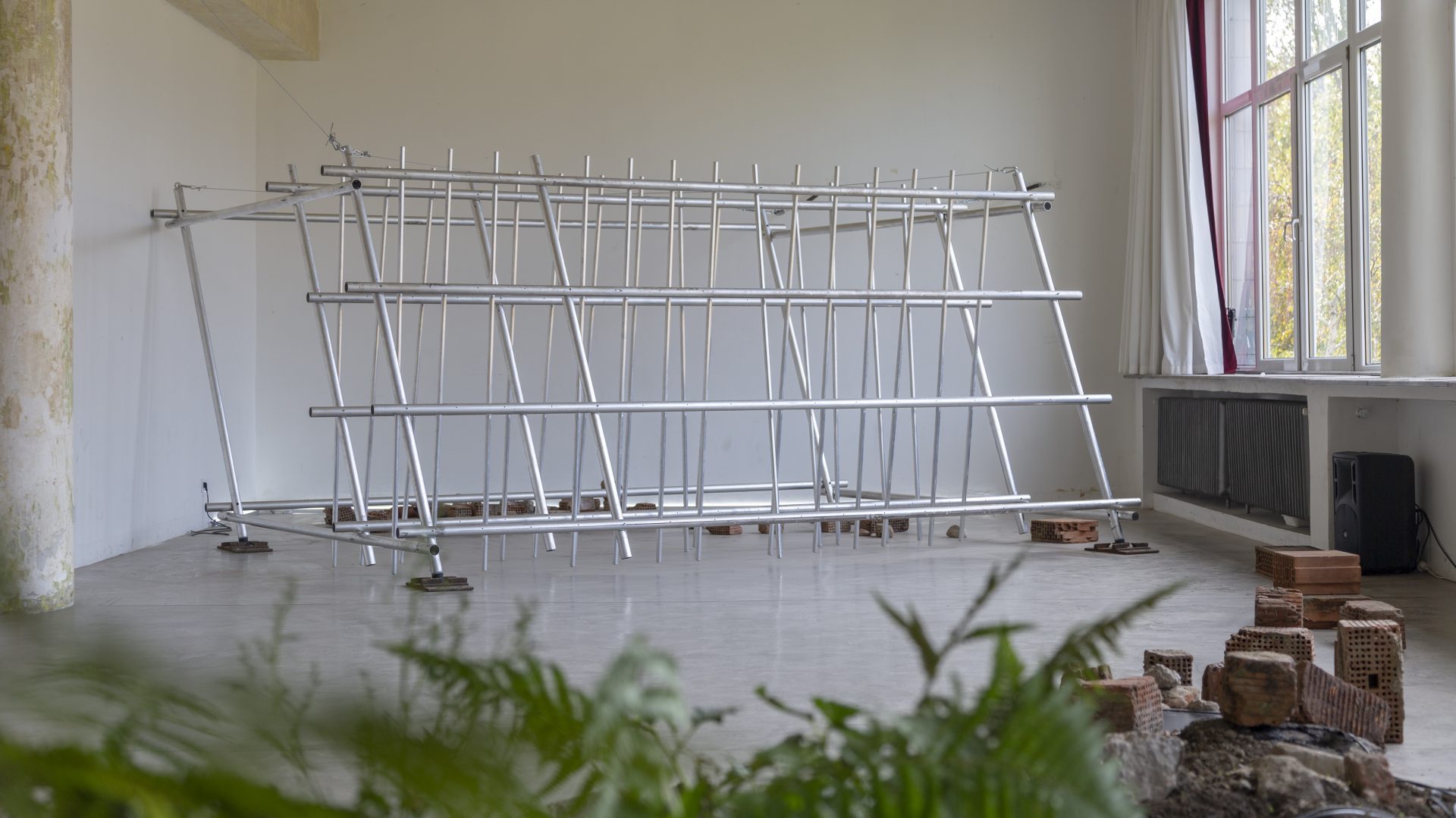 END_OF_DOCUMENT_TOKEN_TO_BE_REPLACED

For Gabriela Zigová, photography is more than just a medium. Mastering the technology of her work formally is only the beginning for her; it’s a state rather than a tool. Thinking within photography has been of great importance to her since she first studied it at high school. In 2015, she graduated from the Academy of Fine Arts and Design in Bratislava Department of Intermedia, where the formal and content discourse of her works started to re-form. It would be simplistic to classify her as a multimedia artist—which she is, but it’s not fitting enough, as both the form and the attitude towards her usage of photography go beyond any all-embracing definition.

Similarly, labeling her as a photographer (and a performer) is too restrictive. Her works don’t start and end with photography. Photography as such is particular in its relationship to reality; it doesn’t depict or interpret, it provides a trace—a testimony. This can be the foundation on which the author builds, but it can also be the purpose through which she tells the idea of the work, defines it. As such it can be a tool for manipulation, a witness of reality, but it will never stand on its own[1]. It offers an ambivalently open interpretation level and, secondarily, it functions as its own sociological self-portrait.

Despite the fact that at the end of her studies her focus shifted towards socio-political issues processed through different forms, almost omitting photography (or using it exclusively as documentation material[2]), after “resettling” in London photography again became a significant refuge as well as a stepping stone for her existential work. Her diary archive, which was created in this way, was the basis for the selection of visual addenda to the work Breathe at the exhibition Ecology of Desire of the Oskár Čepan Award. As a whole, these “realistic” and almost “satirical” photographs reflect social environment as encountered through her travels and the ongoing search for her own place in society constantly posing the existential question of ‘what is this life I’m living?’. Each of us has his/her own way of dealing with the fear of future. But perhaps, at a stage in life wedged between learning how to live and living, this manner of finding their social, professional and geographical place of belonging is characteristic of her generation.

Photography doesn’t only record different places of the world; it’s also connected to accidentally important personal life situations. A selection of archival photographs in different contexts was presented by the author at several exhibitions, not only in Slovakia[3], throughout the period of time during which these photographs were taken. Crucial contexts influencing their meaning were contained in the names of these exhibitions, as well as in printing and installation methods.

It Takes One to Know One/Private Versus Public

When creating her works, Zigová draws directly from her own personal experience, from experiences that she reviews; and, in a more global context, she searches for their circumstances, implications or paradigms. Thus she creates her own self-analysis as an impetus for investigation of a broader social construct. This principle has been evolving in her work since her studies, taking her from a less personal all-embracing criticism to more intimate impulses when thinking about the world. She graduated with a master’s degree from the studio of Ilona Németh; besides being her mentor and teacher, Ilona Németh also became the subject matter of her master’s thesis, together with her teacher Anton Čierny. Zigová used their figures as symbols of the institutional university environment with which she had her own personal experience and relationship, thus demonstrating the influence of an authority on an individual or a group[4]. This approach is typical for her and is repeated in her works, in different forms. In a certain way, it’s characteristic of her thought process. As I’ve already mentioned, in her post-studies period she began focusing more on existential and community-social narratives and this has clearly led her from local discourses to more global reflections. The title of the work Breathe draws from an intimate moment of an internal monologue which the author leads with herself in the moments when she finds herself in overcrowded places under the crowd’s pressure. Almost every person living in a metropolitan city experiences similar feelings about overcrowded places when in common or group situations. This mass of people who are physically so close to each other and, at the same time, personally so distant -alien- to each other, this physical pressure and inevitability of tolerating this kind of situations, represent an impulse which launches another thought process leading to the final visual expression of the work (in her text BREATHE, Johanna Trost studies them in further detail).

The author herself says that, for her, photography is a form of diary, where written word is substituted by photography composition. This is another conspicuous characteristic present in the work of Gabriela Zigová. The visual metaphor with which she often works combining direct and indirect symbols, is complemented by its verbal confirmation within the work’s title. A significant example illustrating this principle is the work Cha(æ)r. Zigová acquired this readymade in an unnamed institution and it represents a concrete cultural function. On the chair, she literally visualizes its deconstruction and deformation through her own language—photography manipulation. She appeals to the iconic symbol and its significance in visual art and its history. At the exhibition in Gallery Sumec situated at the premises of a secondary art school, the largest part of her site-specific performance involved balancing on a school chair and by a readymade of a specific chair hung up without its seat—deprived of its function. This method and composition of the work is echoed in the work Breathe, in which the author repeatedly uses this combination of formal elements: performance, readymade, photography.

For Zigová, the medium of performance represents a form of experiencing. The frequent presence of physicality in her work substitutes cultural-political criticism as a topic and highlights a broader existential undertone. The fact that she had an inclination towards this medium was evident even in her early works —precisely in working with audience or targeted use of other actors[5]. She acquired a greater stability in her performative forms after visiting the festival Transart Communication. On this occasion, one of her fundamentally different works was created— Vicious Circle[6]. Spinning in a vicious circle is a clear metaphor reflecting upon one’s own personal experience as well as an evaluation of one’s social status, which in this performance merge into one. The work provokes rhetorical and over-interpretive questions, such as who the one aimlessly wandering and furiously spinning in a circle could be. Is it a representation of an individual lost in his/her existential problems or a mass of entities lost in the whirlwind of the world? In this work, the author uses the physical act of an intentional loss of balance or stability. By contrast, in the work Balance, Zigová tries to find a stable position on two chair legs[7]. She has adopted this test of stability and she modifies the work itself and repeats it just like the work Vicious Circle. I venture to read it also as a self-portrait goal which she herself determines and tries to overcome or dominate. It’s a sign of her greater identification with the communicated ideas thanks to her own works, thanks to herself.

[1]In the author’s works, we could repeatedly find the principle of postproduction within which the author additionally manipulates her own photographs, doing a direct photographic intervention (Cvernovka, 2016), reassembling them into bigger compositions (Cha(e)r, 2017) or installing them in unconventional ways—by which I point towards the use of one’s own photographs as printing (Breathe, 2019).

[2] For example in the following works:
Res Ipsa Loquitur (The Thing Speaks for Itself), 2013, site-specific installation: bachelor’s thesis
“The photo documentation of the author’s bachelor’s thesis Res Ipsa Loquitur (The Thing Speaks for Itself) sheds light on a performance in which she worked with three iconic symbols of the Christian Church—a white dove trapped in the space of a makeshift popemobile placed on the square in front of The Holy Trinity Church in Bratislava. Her work responded to the circumstances of the Pope’s abdication at that time and it’s a persistent criticism of Catholic society.” (excerpt from  the curatorial text by Radka Nedomová for the exhibition Ilona Németh, Gabriela Zigová, GMAB Trenčín, 2017)

*Established Model*, 2015, a series of exhibitions, a combination of techniques and forms: master’s thesis

[4]*Established Model*, 2015: The master’s thesis consists of a cycle of exhibitions in which the author focuses on the issues of an art institution in general and the cases with which it deals. As a studying artist, the author investigates different influences and impacts of one’s own formation within the school environment. In the conclusion, the author reflects on the development of her own studies and factors that influenced the shape of her identity as a future artist. Through a classic medium of a bust, she depicts two dominant pedagogues.

[5]For example:
Till when?, video performance, 2014 The work records a young people’s debate evolving around a newly emerged political situation in Slovakia. Zigova created an environment in which she projected footages of radical nationalistic attitudes of the members of—now established—political party Naše Slovensko. This way, she gives an impetus to the invited interlocutors to direct the debate.

Model Scene (performance with Zuzana Sabová) at the exhibition: *Established Model*, Magdaléna 4D Gallery, Bratislava, March 6–March 20, 2015 The exhibition and exhibited works formed part of an exhibition cycle in which Zigová aimed at their culmination in her master’s thesis. In this cycle, she focused on the problems of an art institution and the topic of an institution as a cultural partner and its paradoxical necessity for a revolting artist. In a hidden performance right in front of the audience, during the exhibition opening she performed a staged argument with the gallerist about fictitious problems with the exhibition installation, such as insufficient material and technical support and so on.

[6]Vicious circle, performance, 2016–2018 The work was realized on different occasions and in different places. The performance itself is adapted to different circumstances of its presentation by the author, changing its symbolic details to acquire certain thematic undertones. It’s important to emphasize that when she performed it for the first time she filmed and photographed her surroundings. I would include precisely these photographs in her diary cycle or archive. On them, we can see the frightened faces of the people who were watching her fast uncontrolled spinning in the circle.